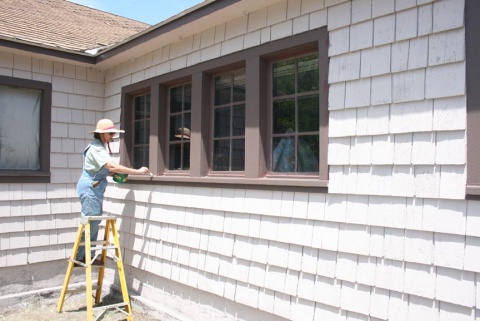 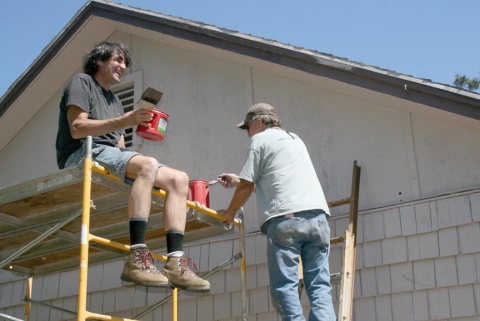 Efforts to restore and preserve the historic buildings Siskiyou Smokejumper Base began in 2004 with the preliminary work being done to identify the significance of the base’s history, collect historic photographs, and begin processing the paperwork necessary to get the base listed on the National Register of Historic Places.

The buildings were badly deteriorated and preservation advocates had difficulty getting permission to do preservation work from the airport administrator. The first attempt to work on the parachute loft occurred in October, 2008.

In June 2009, the first restoration project week was organized with about twenty volunteers working for a week to restore the exterior of the historic parachute loft.

In June 2010, more than 100 people came to participate in the work week with the emphasis focused on restoring the administration building and installing a roof on the parachute loft. 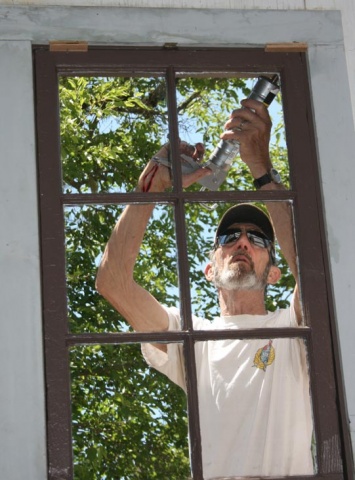 The first work to be done on any of the historic buildings at Siskiyou Smokejumper Base occurred in October of 2008 when a small group of community residents scraped paint on the parachute loft in preparation of painting the building. The work party worked for about four hours on one day but was unable to continue work because of complications and delays getting authorization from the airport administrator. 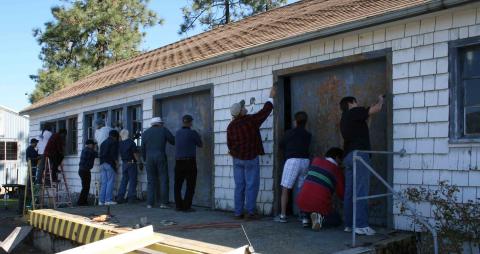 The first full scale restoration work to be done on the historic buildings in the Siskiyou Smokejumper Base took place in June of 2009 with emphasis being placed on restoring the exterior of the smokejumper parachute loft. See links to different work days above to see galleries of photos taken during each work day. 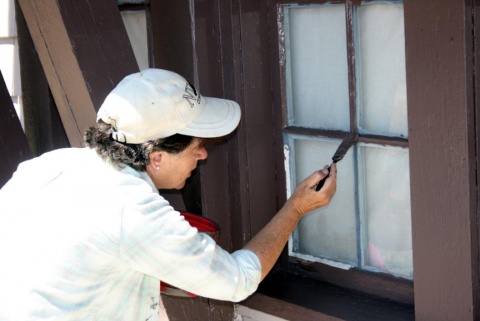 There had been no work done to maintain the historic parachute loft in thirty years and the result was extensive deterioration of windows, rot in areas where water leaked into the building, shingles falling off, and roof leaking.

The first day of the parachute loft restoration project involved removing and replacing portions of the structure that were rotted and needed to be reconstructed to stabilize the structure. While one crew removed the rotted boards, another crew began work on reconstructing the badly deteriorated window frames.

The objective of the 2009 project was to restore structural integrity of the loft, weatherize the exterior, and return the building back to its original color when it was first painted in the early 1950s.

Work continues on the parachute loft with much of the interior construction work on the south side of the building being completed and crews working on preparing the building for painting. A crew continues working on rebuilding window frames.

The structural reconstruction crew moves to the north and west sides of the building and begins doing work. The upper vents on the south side of the building are removed and rebuilt. Window crews continue rebuilding windows. Other volunteers work on preparing the building for painting.

As crews continue to work on reconstruction of the building and windows, the first coat of paint is applied.

Crews begin painting the trim after final coat of paint is applied.

Daryl and Alex Ponder, owners of Down and Out Seamless Rain Gutters donated their time and equipment to install new gutters around the entire parachute loft.

The 2010 project week was focused on restoring the historic administration building, cleaning and painting the interior of the mess hall, and putting a new roof on the smokejumper parachute loft.

More than a hundred volunteers showed up this week with an average of about 60 people working each day.

The large number of people made it possible to work on projects that had been planned for the 2011 project week to include fixing sidewalks problems that were barriers to wheelchair access, trimming trees, and installing a new roof on the mess hall. 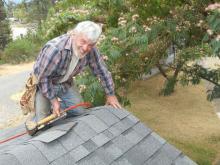 The emphasis of 2011 project week will be on getting the parachute loft cleaned out and work started on setting this up as the main museum. Planning has been on hold for several years due to complications with the current tenant being able to obtain a lease for the metal warehouse immediately north of the loft so he can move out and open the building for development of the smokejumper museum.

There will also be work done to complete an Oregon Heritage Commission Grant and will include installing displays in the mess hall visitor center and setting up displays for a walking tour (400kb).